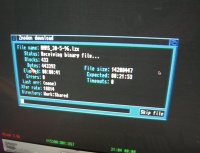 Download a file with NComm 2.0 using the ZModem protocol.

NComm is, besides Term, one of the most popular shareware terminal programs.

In the 90's it was preferably used to connect the Amiga to a BBS system like AMMS via a modem connected to a telephone line. The program is well suited, for example, to exchange files between any two computer systems via the serial interface.

The application is very slim and can be started from a floppy disk on an A500. NComm was originally developed by Daniel Bloch. Later versions were released by Torkel Lodberg. The last release was in 1996 and had the version number v3.06.

Since 1998 the Amiga community has been provided with a free license key.