This is a non-functional prototype of the PIOS One personal computer, main board and single-processor CPU module.

So back in 1995, I was brought in to Amiga Technologies to consult with their management on the future of Amiga. We agreed that it was possible to design a PowerPC-based Amiga of some sort, and to port the operating system to a HAL-based, CPU-independent code base. This was actually happening. And then ESCOM got into trouble by overextending themselves, and it ended.

Out of that came PIOS AG, a company formed between me, Andy Finkel, Stefan Domeyer, and Geerd Ebeling, kind of out of the ashes of Amiga Technologies. We tried to get the rights to do the Amiga port, but pretty much got cut off at every turn. And so we ultimately decided to make Macintosh Clones.

The first clones were built using Apple-certified motherboards from Taiwan's UMAX, and in-house PowerPC modules designed by Thomas Rudloff. But the future was supposed to be the standard PowerPC architecture. Of course, there was the original PReP standard, and eventually, CHRP. I mean PPCP. No, it's CHRP… Apple was jerking everyone around on this for some time. Anyway, toward this effort I designed a system, which we called the PIOS One.

I had seen how well Commodore's high-end strategy of separate CPU boards had worked for a smaller engineering effort, where we couldn't build new main boards every year, and used that approach here. The main board is basically a PCI subsystem, the CPU module contains the entire CPU bus, main memory, etc. The main board supported USB, SCSI, PATA, serial, parallel, a unified front panel connector, and built-in sound. There was an audio expension slot, which would allow for low-cost multichannel digital audio add-ons, three PCI slots, and three ISA slots. The CPU module included here is PReP-compliant, not CHRP, and includes a PPC603 processor, three memory DIMMs, and a processor upgrade socket, which was a PowerPC standard in those days.

Curiously, the board has a very early prototype of an Analog Devices sound chip, which was pretty advanced – and cancelled before it even actually went into production. Ouch! The problem was that PCI audio chips were starting to catch on, and this wasn't PCI-based. This was changed for an Aureal Semiconductor audio chip on Rev 2, a much better chip.

The Rev 2 board also changed the interface connector to add more signals, the option of a 64-bit main board interface, and other goodies. We designed two modules for the Rev 2 board (one was included earlier in this auction series), a single processor and a quad processor board. Some of these were not even built up once the PCBs came back. Once Apple had cancelled MacOS licensing, the PowerPC stuff shut down practically overnight at PIOS. 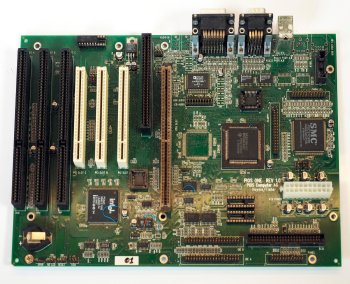 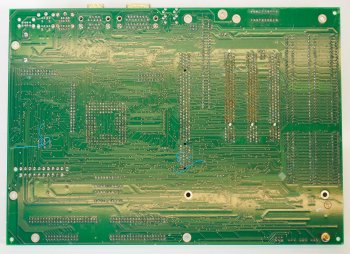